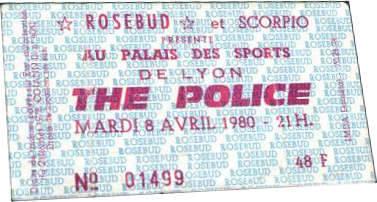 We are on Tuesday, April 8th, 1980, in front of the Sports center of Lyon, it is 8 pm, and in the line, Eric still ignores that the concert which he gets ready to see will be the biggest musical shock of his life. Within one hour, Sting, Andy Summers and Stewart Copeland are going to release their ardour and to take the public in this brilliant whirlwind of reggae-rock which they invented. Eric did not imagine either that this love at first sight would bring him to create much more late - in 2007 - a group in homage to the mythical trio of the English pop. This group will be called «THE SMOOTH SKINS» !

Shortly completed by Jihem on bass and vocals, and a first drummer who will be replaced in 2011 by Mathieu Lescuyer, the group quickly begins to occur on stage in the South of France, acquiring experiment and increasing public. Every concert confirms the implication of the three musicians in the reproduction of this definitively modern, powerful and varied music.
The interpretations of THE SMOOTH SKINS draw from the sound of the albums of THE POLICE, and also from the incredible live performances of the band, which are unique moments of inspiration and improvisation.

“The interpretations of THE SMOOTH SKINS draw from the sound of the albums of THE POLICE, and also from the incredible live performances of the band.”